9 HEALTH BENEFITS OF MASSAGE
By Sarah Klein of Huffington Post 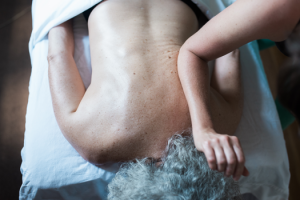 1. MANAGES ANXIETY AND DEPRESSION: For the same reasons that a massage is relaxing, it can also relieve anxiety and depression by reducing levels of the stress hormone cortisol, resulting in lifted spirits and often lowering blood pressure. Massage can also boost the neurotransmitters serotonin and dopamine, which are involved in depression.

A recent study published in the Journal of Alternative and Complementary Medicine showed that participants who received Swedish massage twice a week experienced decreases in cortisol levels.

2. REDUCES INFLAMMATION: A study published on February 2, 2012 in Science Translational Medicine found that massage really does work to ease those sore muscles after a tough workout. Just 10 minutes can reduce inflammation, which can help your body recover.

3. REDUCES PAIN: Eight out of 10 Americans will experience debilitating back pain, according to Time.com, but a massage can help.

According to a 2011 low back pain study published in the Annals of Internal Medicine, getting a swedish or structural massage was worth considering to help alleviate chronic low back pain. After receiving 1 massage a week for 10 weeks, 1 out of 3 patients improved and were pain free, compared to 1 in 25 given ‘usual care’.

A 2006 study published in the December 11 Archives of Internal Medicine showed weekly to bi-weekly massages were helpful in decreasing stiffness and pain, as well as improving range of motion in people with osteoarthritis.

4. IMPROVES SLEEP: If you’ve ever fallen asleep while getting a massage, you probably don’t need to be coaxed into believing massage can promote healthy sleep. Numerous studies have delved into this link, and accredit it to massage’s affect on delta waves, the kind of brain waves connected to deep sleep, according to Health magazine.

Two years later, the same study was conducted, but focused on the differences in hormone levels with different frequencies of massage. It was reported that the participants who underwent the Swedish massage twice a week experienced decreases in cortisol levels, increased oxytocin (also known as the “trust hormone”), and slight evidence of increased white blood cell counts.

6. INCREASES ALERTNESS: Want to boost your brainpower? Adults who were given a 15-minute chair massage in a small 1996 Touch Research Institute (TRI) study were more alert and completed a series of math questions faster and more accurately.

7. ZAPS HEADACHES: A 2009 study found that a 30-minute massage decreased pain for people with tension headaches, and even curbed some of the stress and anger associated with that pounding head.

8. ANTI-AGING EFFECTS: “Massage increases blood flow, which plumps up slack skin, encourages lymphatic drainage (the shuttling of toxins out and away from cells so that more nutrients can travel in) and adds vitality to a dull complexion and lackluster hair,” Kimara Ahnert, a New York City skin-care studio owner told Women’s Health.

9. EASES CANCER TREATMENTS: Massage is particularly helpful for people living with or undergoing treatment for serious illnesses, like cancer. Various studies have shown that massage can relieve fatigue, pain, anxiety, depression and nausea in cancer patients.